Find the best deals on flights, hotels or car rental and go on an unforgettable journey 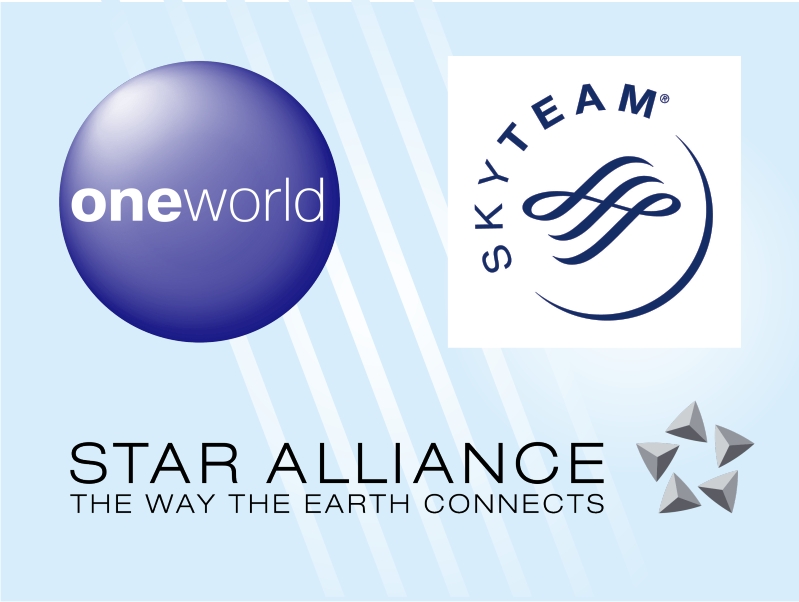 Airline Alliances are partnerships between or among airlines between two or more airlines agreeing to cooperate on a substantial level. Within these collaborations, airlines can share resources, pick up or extend partner routes and even offer the ability to earn and redeem miles through each others’ rewards programs. Alliances may provide marketing branding to facilitate travelers making inter-airline codeshare connections within countries. One specific example is that members with Star Alliance Gold status can take advantage of Star Alliance lounges in airports around the world. This branding may involve unified aircraft liveries of member aircraft. There are three of them: Star Alliance, SkyTeam and Oneworld, in order of size. They make connections and mileage collecting and spending easier. Since their appearance in the late 1990s, they have been a welcome innovation for flyers who have elite status, which gets recognized by all partner airlines.

“Alliances offer more city pairs, service frequencies and the ability to seamlessly shift from domestic to international flights,” said Richard Aboulafia, vice president for analysis at the Teal Group, an aviation consulting firm. “All without having to change brands, terminals or airports.”

Airline alliances evolved mostly as a result of globalization. “With new manufacturing facilities in China and major markets opening in Europe, travelers suddenly found themselves with far different needs than in the past,” said Christian Klick, vice president of Star Alliance, the oldest and largest such group. “Alliances created a new global reach to satisfy these burgeoning traveler demands.”

Codeshare Flights: Many airlines decide to join an airline alliance because it makes codesharing possible. This means that an airline is able to publish and market a flight under its own airline designator and flight number, when it may in fact be operated by multiple airlines. This effectively boosts the number of destinations that an airline can offer. Have you ever flown an itinerary that was booked through one airline but operated by another? You can thank an airline alliance agreement. Codeshares allow customers to book a larger variety of flights directly through one airline than that airline operates by itself. This means that long-haul or multi-connection tickets can be booked all the way through with the same airline, even though the flights may be operated by multiple airlines.

Going somewhere your airline can’t quite get you? Does your airline not have a flight along one leg of your journey that works for your schedule? One of its alliance partners might. Instead of booking multiple itineraries, you can book one itinerary with multiple airlines that are partners. Codesharing also means that travelers have a wider range of departure times and that travel times are often significantly reduced thanks to this optimization. Airport lounges are also more comfortable and can be shared by airlines.

Similar logic that informs codeshares informs the earning and spending of Points and Miles. Every time customers fly, they accumulate points for future travel discounts as well as other benefits. The main benefit for the customer is that for every flight, the airline rewards air miles (often called points) that discount the cost of future flights.

Other benefits for customers include discounts on services related to flights, such as baggage or seat selection. Customers on a frequent-flyer program often have priority on travel class upgrades, access to airport lounges, early boarding and more. Frequent-flyer programs are often used in collaboration with credit card companies. When a customer uses the credit card for purchases, they receive points in their frequent-flyer club.

Not only is it possible to redeem your miles for flights on partner airlines, but membership status offers benefits across multiple airlines within an alliance too.

Perhaps the most important aspect of an alliance is the centralization of customer relations. Flying multiple airlines with multiple codes can cause a major headache if something goes wrong in the middle of your journey—especially when the airlines don’t communicate with one another.

Alliances enable airlines to communicate and operate with centralized customer relations such that when things go wrong, one airline’s customer relations can adjust, fix, rebook or otherwise repair the itinerary with minimal hassle.

SkyTeam was founded in June 2000 representatives of Delta Air Lines, Aeroméxico, Air France, and Korean Air held a meeting in New York to form a third airline alliance. These became the four founding carriers of SkyTeam. It became one of the world's three major airline alliances: the first two being Star Alliance and Oneworld.

Upon its formation, SkyTeam started to offer its customers a total of 6,402 daily flights to 451 destinations in 98 countries. In September 2000, the alliance established a cargo alliance, SkyTeam Cargo. The group's inaugural members were Aeromexpress, Air France Cargo, Delta Air Logistics and Korean Air Cargo.

Today, the SkyTeam network operates nearly 15,445+ daily flights to 1,036+ destinations in 170+ countries. The alliance and its members have 750 lounges worldwide.

Its annual passenger count is 630 million (2019), the second largest of the three major alliances. As of January 2019, SkyTeam consists of 19 carriers from five continents and operates with the slogan "Caring more about you".

The emblem features half a circle with an elaborate curvy pattern inside. The lettering “SkyTeam” can be seen to the right.

SkyTeam Cargo partners ten carriers and all of them are SkyTeam members. Its centralized management team, SkyTeam Central, is based at the World Trade Center Schiphol Airport on the grounds of Amsterdam Airport Schiphol in Haarlemmermeer, Netherlands.

According to IATA every day, approximately 100,000 flights take to the sky and land without incident. Flying continues to be of tremendous importance to modern life and getting on an aircraft is among the safest activities that one can do.

In 2020, the international air transport rating agency Skytrax launched the COVID-19 Airline Safety Ratings. It is the world’s first COVID-19 Safety Accreditation for the airline industry that follows a comprehensive assessment of the airlines’ health and safety measures for customers and staff members across the entire travel journey. Skytrax provides independent, expert evaluation and certification of airline COVID-19 hygiene and safety measures that is regarded as a global benchmark for Certifying COVID-19 safe travel standards that are based on professional and scientific investigation of the standards for an airline at the airport and onboard flights.

Skytrax evaluated more than 190 safety and hygiene protocols at the condition airline during the audit: cleanliness at the airport and onboard flights, social distancing measures, use of face masks and sanitizers, and other hygiene improvement systems.

Skytrax evaluates the cleaning and disinfection procedures at the airport and onboard aircraft, recycling of the cabin air, special signage and floor markings to ensure physical distancing, the compulsory wearing of masks, provision of hand sanitizer, and an adapted service in the airports' lounges and onboard aircraft.

International air transport rating organisation Skytrax was established in 1989. It is a United Kingdom-based consultancy that runs an airline and airport review and ranking site. Skytrax World Airline Star Rating is recognised as a global Benchmark of airline standards around the world for its Airline and Airport Star Rating, the World Airline Awards and Airport Awards.

Team members log hundreds of thousands of air miles every year across airlines worldwide, and have unique expertise and experience embracing aircraft “without fear or favour”.

The Star Rating uses a quality scale from 1-Star through to the exclusive 5-Star Airline award. Ratings are based on the evaluation of product and service standards across the onboard and airport environments, using a unified and consistent rating system. It's worth noting that Airline Star Ratings are not associated with customer reviews, and are based on research by Skytrax Audit Office.


A brief explanation of  Star Rating levels is shown below:

Airline Star Ratings are known as a global benchmark of world airline standards, developed through many years of professional experience and Skytrax specialist, qualitative knowledge of the airline industry.

The World Airline Audit that may be used as part of a rating analysis delivers a complex quality analysis across all areas of Product and Service that customers experience across the airport and onboard travel experience, with rating accuracy supported by the Skytrax unified and global approach.